OUYA: The ‘Open’ Video Game Console for Users and Developers 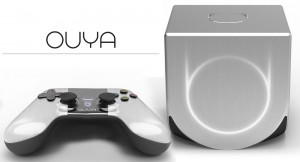 Amazingly, OUYA, the open video game console platform raised $8,596,474 in funds on KickStarter. OUYA is based on the Android 4.0 operating system. The idea is to create a low cost console (currently $99) available for consumers that also allows developers to publish their Android games/apps to OUYA without requiring the purchase of an expensive SDK and paying licensing, retail, and publishing fees. Anyone is free to develop and publish games that can be easily downloaded and tried for free; if the user likes the app or game, he/she may purchase the full version. It’s actually quite innovative in the sense that the traditional closed living room gaming experience is now open to any developer without the traditional costs associated with developing games for known platforms like Nintendo Wii, Microsoft Xbox, or Sony Playstation.

Further, everything is through the cloud – no CD or cartridge drive required. Just turn it on, connect to the internet, and download the games you want to play. All games/apps are free to download and try. Below are the specs of the console.

Muffi Ghadiali was hired as VP of Product Development and has been working intensely overseeing OUYA’s hardware and software development. Muffi prior worked at Amazon’s Lab126, developing hardware and software for the Kindle. Muffi claims that OUYA will be able to “support some intense games” as a result of using the NVIDIA Tegra 3 chip and working closely with NVIDIA.

I recently picked up a console (which also includes one controller) for $99. I have to say the price is pretty good considering Microsoft Xbox and Sony Playstation start at around $250. Nintendo Wii will be more of a competitor at $130. However, it’s really hard to compare these platforms as its obvious OUYA, at least right now, cannot compare with the experience, hardware specs, and game libraries available with Xbox, Playstation, or Wii. I see the OUYA as more of a different beast that provides an ‘Open’ platform for players and developers; that’s really where it outshines the other Goliaths in the gaming industry. Whether it’s enough for it to succeed or not remains to be seen, however, even though I’m not a big gamer, it was innovative, different, and cheap enough for me to go pick-up a box at $99.

Setting the OUYA up was extremely easy, experience was good, controls and functionality were also good if not better than what I’ve seen from others. I like running the games from the hard drive as it’s much faster than running from DVDs (I realize downloading and running games is also available from other vendors). The small cube form factor is professional looking and a space saver (also makes it easy to travel with if desired). The online library of games is easy to browse, search, and download games from. By far the best feature/capability for me is the ability to install and muck around with apps usually ported over from Android. Someone ported over the ubiquitous VLC player which is available for install through the library menus; I installed this and was pleasantly surprised. 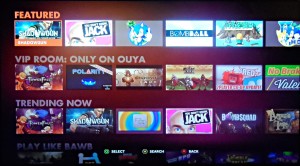 OUYA has the possibility to open new doors in an otherwise ‘closed’ industry. I hope it succeeds as I believe a lot of new innovation can sprout from such initiatives. I believe a lot of its success is going to be tied to the success of providing a useful SDK for game developers. No cool games = no cool console = no users. I believe Muffi realizes this as do many others. Quite early in the project, he was quoted stating one of the top priorities is getting the OUYA SDK in the hands of eager developers.